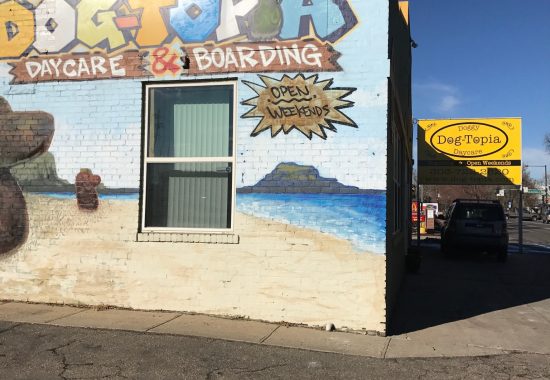 Entering Dog-topia one encounters loud, persistent barking punctuated by the occasional silence. The silence does not last for long as there is often something happening at this busy doggy daycare and boarding facility located in Denver on Lincoln and Alameda. Owner Erin Loughrey wouldn’t have it any other way.

Loughrey began her business back in 2002 on Fifteenth and Platt and moved the current location on Lincoln in 2010. People looking to work there have to possess a necessary blend of good customer skills first followed by dog skills, and it is shows as both customers and dogs are always greeted with big smiles.

Opening at the crack of dawn, or even before, at six-thirty in the morning, and closing at seven at night, dogs can spend their day socializing with up to one hundred other dogs, although the average day sees about seventy.

“Even though they have good bonds with the people who work here, the dogs usually just want dog time,” Loughrey explained in her typically cheerful manner. “Generally they don’t even want to hang out with humans.” They are closely supervised though. Rather than being separated by size, the staff puts them into groups based on the dogs’ temperaments so that calmer dogs can have a relaxing day while the more playful pooches can spend their day chasing one another. The dogs have roughly ten thousand square feet to play, and during the summer, swim in wading pools that the staff sets up outside.

About 1 p.m to 3 p.m. seems to be a down time for many of the dogs as they have burned off a lot of their earlier energy. Then they get revved up again for the late afternoon pick ups. Owners are happy to have a tired dog at the end of the day although Loughrey laughs and is quick to point out that dogs are “completely different here than they are at home.” Considering most of us do not have seventy dogs to hang out with at home, this is completely believable.

And while most of the dogs belong to Denver residents, a few of the pups who hang out at Dog-topia have been rescued by the Aurora-based dog rescue organization DMK Rehoming and are looking for forever homes.

Dog-topia is one of many businesses that accepts pet food donations on our behalf–see the full list of partners here. We then distribute the pet food at pet food banks. Learn more about this important Colorado Pet Pantry supporter Dog-topia or visit their FaceBook page.